5 Jurassic World dinosaurs you can “meet” at Paultons Park 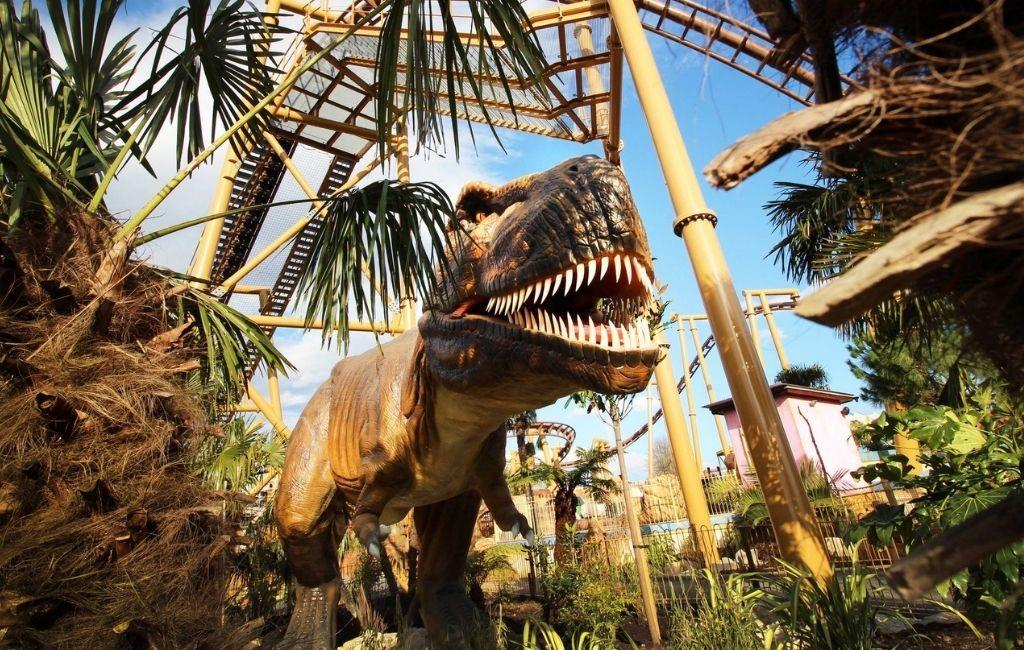 This month saw the release of Jurassic World Dominion movie; the much anticipated final instalment of the Jurassic World trilogy, which follows on from the original Jurassic Park trilogy of the 1990s and remains the most famous dinosaur movie franchise of all time. As you know, here at Paultons Park, we love dinosaurs and so we thought it would be fun to celebrate this pivotal moment in dinosaur pop culture by sharing some dinos of our own!

Paultons Park is home to Lost Kingdom; an incredible dinosaur themed park area full of thrills, chills and family friendly attractions. Lost Kingdom boasts some of the most amazing dinosaur rides in the UK, including a whopping THREE coasters and a classic 4×4 style dinosaur themed tour that is a staple to any Jurassic adventure.

As well as being a place to explore and adventure with your family and friends, Lost Kingdom at Paultons Park is also home to some of the world’s favourite dinosaurs, including some iconic creatures that feature in the new Jurassic World Dominion movie. In this article, we’ll be taking a look at 5 of these famous movie dinosaurs. You can sneak a pic in here, to see the whole aria, or you can come over and see them in person.

Ready to take a look at the dinosaurs of Paultons Park? Let’s dive right in!

Where better to start than with this lovable herbivore? Brachiosaurus was the very first dinosaur to be shown in the Jurassic Park movie franchise and has been a fan favourite ever since. Well, you can also see this gentle giant right here at Paultons Park.

Towering above you at a mighty 12 metres high, the impressive Brachiosaurus is easily recognised by its long neck reaching to the sky. Brachiosaurus is part of the sauropod family of dinosaurs, known for their long necks, long tails, small heads and four strong pillar-like legs. Sauropods like Brachiosaurus are all herbivores, which means they eat a plant based diet of conifers and other ancient trees.

See if you can spot the friendly sauropods as you adventure through the prehistoric landscape here at Lost Kingdom. With their long necks and majestic stance, they shouldn’t be too hard to spot among the trees should they?

Want to know more about this big friendly giant? Check out our awesome Brachiosaurus facts.

These flying reptiles dominated the skies millions of years ago, they terrorized the skies in the movie franchise and they have even landed here in Paultons Park! Not only have they landed, but they have taken off again in a big way. And, this time, YOU can actually take to the skies with them.

Here at Lost Kingdom, Paultons Park, you can join the iconic winged reptiles in flight and enjoy the thrills of a unique 395m suspended roller coaster, Flight of the Pterosaur!

Brave explorers will be strapped into this roller coaster which soars, swooshes and swoops through the air reaching top speeds of 30 mph. This thrill ride really captures the spirit of the mighty pterosaurs and allows you to imagine yourself flying through the prehistoric land of Lost Kingdom, immersing yourself in life as a pterodactyl and making unforgettable memories with your family and friends as you go.

No Jurassic adventure would be complete without an encounter with the marvellous Triceratops – and it’s no different here at Paultons Park. Triceratops is one of our absolute favourite dinosaurs. In fact, we love it so much that we’ve decided to include it in our theme park in a big way!

Perhaps one of the best known things about Triceratops is its magnificent three-horned appearance but there is so much more to learn about this amazing dinosaur. For instance, did you know that there are actually 2 different species of Triceratops? Or that Triceratops was originally discovered by a cowboy? No? You need to catch up on our top Triceratops facts! You’ll soon be in the know.

While you are visiting Lost Kingdom at Paultons Park, you’ll be able to celebrate the terrific Triceratops with us by taking a ride on Dino Chase. Dino Chase is a child friendly dinosaur roller coaster that reaches top speeds of 15 mph.

Junior explorers can jump into the Triceratops themed ride vehicle and enjoy views of the park on this fun filled adventure. Who knows… you may even spot a sauropod or two peeping through the treeline as you whizz around having the time of your life.

Velociraptors have been a staple of the Jurassic Park and Jurassic World movie franchise from the very beginning. Some of the most memorable Jurassic Park scenes include chases from the formidable raptors and who could forget the incredible “Blue” who features heavily once again in the latest movie in the series: Jurassic World Dominion. We can’t even begin to imagine a dinosaur themed world without these amazing creatures and, thankfully, we don’t have to.

Whether you think velociraptors are a dream come true or the stuff of nightmares, you’ll be thrilled to know that they feature heavily here at Lost Kingdom. Not only can you spot them in the undergrowth (unless they spot you first…), but they’re also the basis for the exciting and scream-worthy Velociraptor ride.

This terrific ride sends you up a whopping 20m into the air before you come speeding down at 40 mph. As you rush round curves and bends, you’ll truly embody the movement of the breathtaking Velociraptor. Only the bravest of adventurers need apply.

Learn the most amazing velociraptor facts to find out how they are different from the raptors in the movies.

…You knew it was coming didn’t you?

We simply couldn’t skip past the world’s favourite dinosaur, T-Rex.

Standing tall, proud and positively terrifying with those knife like teeth and comically short arms, dinosaur fans worldover are mesmerised by the King Lizard himself, T-Rex. And so are we!

As a star of the screen, T-Rex has been absolutely unforgettable. We’ve seen him chase cars with stunning speed and agility, chow down on some very unfortunate goats, chomp people in half and even do battle with other dinosaurs. It gives us chills just to think about some of T-Rex’s most famous movie moments. We’ll let you in on a secret… here at Paultons Park you can actually meet T-Rex in the flesh.

Lost Kingdom theme park boasts an incredible opportunity to meet some of our tame (ish) walking “real” dinosaurs including the fabulous T-Rex at ALIVE! Dinosaur Encounter, where you’ll get the chance to get up close and personal (but not too close) with some of these fantastic creatures. Visit the dinosaur enclosure at Lost Kingdom to check the daily show times for this exciting and memorable encounter.

Do you know what T-Rex’s latin name, Tyrannosaurus Rex, means? You can find out by reading our favourite T-Rex facts.