Brachiosaurus Facts – how large was this Sauropod? 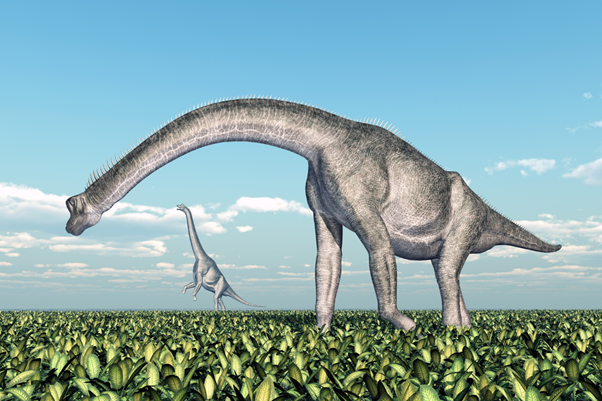 Here at Paultons Park we’re dinosaur mad! We love them so much that we’ve got a dedicated prehistoric themed park area for you to explore and enjoy with your friends and family. It’s called the Lost Kingdom.

Lost Kingdom is full of Jurassic themed wonders. Dinosaur lovers will feel right at home as they’ll be surrounded by dinos of all shapes and sizes. It’s home to all kinds of wild and wonderful creatures, including some of the most popular dinosaurs like T-Rex, Triceratops and Velociraptor.

Included among the world’s favourite dinosaurs is the magnificent, Brachiosaurus. You might recognise this gentle giant as the first dinosaur we see in the iconic dino movie Jurassic Park. We think it’s one of the most impressive dinosaurs around!

We’re excited to welcome you to Lost Kingdom at Paultons Park and we hope you’ll visit us very soon. But before you arrive, why not learn more about the incredible Brachiosaurus and devour this list of facts that you can use to WOW your friends.

Ready to find out more about Brachiosaurus? Here we go!

Perhaps we’re stating the obvious here, but one of the most immediately obvious things about Brachiosaurus was its size. Standing at a whopping 12 metres tall and 23 metres in length, Brachiosaurus was the equivalent of four stories high and longer than a cricket pitch.

Its neck was 9 metres long

We’re all familiar with the Brachiosaurus’ long neck, but can you believe it was a huge 9 metres long? That’s roughly the length of 2 Volkswagen Beetles in a row or the same height as if you stacked 20 bowling pins on top of each other. It is 5 times as long as a giraffe’s neck, which measures an average of 1.8 metres! Imagine the view Brachiosaurus would have had from way up there!

Brachiosaurus was named after its arms

Amazingly, given how impressively tall and long this dinosaur was, the feature that scientists named Brachiosaurus after was its arms! This is owing to the fact that Brachiosaurus’ front limbs were longer than its limbs at the back. This adaptation helped Brachiosaurus reach up tall to get the highest vegetation.

Brachiosaurus was a herbivorous dinosaur, which means that it only ate plants. Unlike carnivores and omnivores, Brachiosaurus didn’t eat any meat at all and would not have fed on any other animals of its time.

The Brachiosaurus diet consisted of gingko trees, coniferous trees (trees like pines or yews that have needles and cones) and cycads. Gingkos are thought to be one of the oldest trees in the world and have been around for roughly 200 million years – and they still exist today!

Gingkos are safe for human consumption. If you love Brachiosaurus as much as we do, you might one day be able to say that you ate your favourite dinosaur’s favourite treat! Yum!

Although he didn’t know it at the time, Othniel C. Marsh actually discovered a brachiosaurus skull. Othniel C. Marsh was one of the palaeontologists involved in the “Bone Wars” of the 19th century and was responsible for the discovery and classification of many significant dinosaur finds.

In 1900 a fossil-hunting group from Chicago’s Field Museum of Natural History found a near-complete fossilised skeleton of Brachiosaurus in Colorado. The leader of the expedition, Elmer Riggs, named the fossil Brachiosaurus.

Brachiosaurus is a Sauropod

Sauropods were known for their long necks, long tails, small heads and four pillar-like legs. Many species of Sauropod grew to be very large, meaning that the classification of dinosaur also became associated with its impressive size.

Brachiosaurus is from the late Jurassic period

Which means that they lived around 150 million years ago. They were alive at the same time as another of the world’s favourite dinosaurs, Stegosaurus.

Brachiosaurus wasn’t the only sauropod to be around at the time. It actually shared the lush ecosystem of the floodplains of North America with both Apatosaurus and Diplodocus!

Have you enjoyed learning about the gigantic brachiosaurus? You should try our What dinosaur are you? Quiz where you can test your new found dinosaur knowledge and find out what kind of dinosaur you would be.

Now that you have learned all about this amazing sauropod, we think you are ready to come and experience the Jurassic period for yourself here at Paultons Park. Come and see your favourite dinosaurs here at the Lost Kingdom where you can tour the park with Dinosaur Tour Co or jump aboard the Dino Chase coaster for a family friendly adventure.

Book your tickets today for the time of your life!!