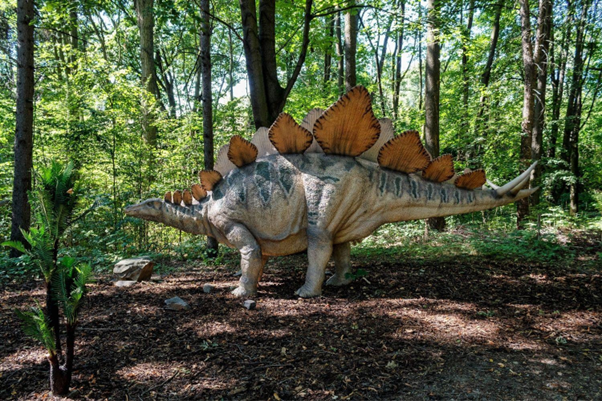 Are you ready to learn some interesting things about the spiny stegosaurus? Great! We’re excited to tell you. Stegosaurus is one of our favourite dinosaurs –  and we LOVE dinosaurs here at Paultons Park.

Did you know that we have a dedicated dino themed area? We’re always ready to welcome new guests to visit the Lost Kingdom at Paultons Park, where you can explore the incredible pre-historic landscape full of rides and attractions. It’s the perfect place to make memories with your family and friends that will last a lifetime. Keep an eye out for dinosaurs when you visit… Although we do ask that guests don’t feed the dinosaurs!

Before you arrive, why not learn more about your favourite dinosaurs right here. You can start with the stegosaurus and then pop over to test your knowledge on our fun dinosaur quiz: What kind of dinosaur are you?

You’ll need to be armed with a bunch of dinosaur knowledge before you brave the quiz so let’s get right into the facts shall we. 10 Things you need to know about stegosaurus!

Stegosaurus is the official state dinosaur for Colorado

Did you know that Colorado has an official state dinosaur? Well it does and it’s our beloved stegosaurus. How cool is that!

Well, back in 1982, Colorado’s governor signed a bill making stegosaurus the official state dinosaur. Incredible really, especially when you consider just how many dinosaurs have been discovered in Colorado over the years – including the terrifying T-Rex and the Triceratops, which was discovered by a cowboy!

The bill was signed after thousands of fourth grade students participated in a write-in campaign to assign the stegosaurus as Colorado’s official state dinosaur. Pretty cool!

Stegosaurus lived around 150 million years ago.

Stegosaurus remains were first discovered during the Bone Wars

In the late 19th century a rivalry between two American palaeontologists inspired a period of intensely competitive fossil hunting that was known as the “Bone Wars”. The palaeontologists driving this ruthless race to outdo one another were Othniel Charles Marsh and Edward Drinker Cope. What started as admiration and healthy competition between the two scientists, descended into a fierce and ruthless rush to become the best known in their field.

The stegosaurus was first identified by Marsh, who thought that it was an pre-historic aquatic turtle like creature. He believed that the plates along its spine and tail were actually arranged in a tile-like formation (similar to a turtle’s shell) and so named the creature “stego” (roof) and “saurus” (lizard); roofed lizard.

Stegosaurus’ plates are a bit of a mystery!

There’s actually a lot we still don’t know about stegosaurus’ plates. Stegosaurus remains have been reconstructed in a variety of ways, including the original layout of flat plates across its back to create an armour. The most widely accepted formation is now the idea that the stegosaurus’ plates stood upright in two alternating parallel rows along its spine and tail.

Scientists are not in agreement as to why these spines evolved in the first place, although it is generally believed that the spikes at the end of its tail would have stuck out horizontally to help fend off predators.

The pointy plates along a stegosaurus’ back could be the most iconic and recognisable of all its features, which makes it extra interesting to imagine that they might not have been that way at all!

Stegosaurus was around 4.3 metres tall and 9 metres long!

Wow! That’s huge! A stegosaurus grew to be around 9 metres (30 ft) long and 4.3 metres (14 ft) tall. That means it was about as tall as a female giraffe and longer than a London bus in length. It’s hard to imagine an animal of that size roaming the earth now, but back in the Jurassic period there was an abundance of vegetation and plenty of large species of dinosaur.

Stegosaurus was a herbivore!

A herbivorous dinosaur, stegosaurus ate a totally plant based diet and would never have eaten other dinosaurs or animals. The stegosaurus is thought to have eaten low lying plants and vegetation.

We know from stegosaurus remains that it had smaller sharp teeth that could tear through leaves but it didn’t have a very strong jaw so, unlike other dinosaurs, it wouldn’t have been able to chomp through hardier plants. This means that the stegosaurus most likely ate a diet consisting mainly of ferns and cycads. Yum!

As well as eating plants, stegosaurus supplemented its diet by intentionally swallowing small rocks. The rocks would have helped the stegosaurus to digest the vegetation in its stomach by moving around in there and helping to break up the foliage.

Stegosaurus had a teeny tiny brain

Despite being one of the world’s most famous dinosaurs, Stegosaurus was not blessed with great intelligence. In fact, the stegosaurus’ brain was incredibly small in comparison to the dinosaur’s size and was actually about the size of a lime.

Dinosaurs had smaller brains than modern mammals comparative to their size and this was especially true for herbivores. Carnivorous dinosaurs had comparatively larger brains and this was especially true of the T-Rex. So, while the stegosaurus certainly had a small brain for an animal of its size, it’s still one of our favourite animals of all time!

Believe it or not, it was once thought that the stegosaurus actually had a second brain in its bum! We now know that this isn’t the case but, if it had been, it would have actually made stegosaurus pretty intelligent for a Jurassic herbivore.

Stegosaurus is the most famous stegosaur

Most of the other species of stegosaur actually come from Asia, unlike Stegosaurus which we know lived in North America. It was also related to the ankylosaurus, which is another four-legged grazing herbivorous dinosaur known for its all over body armour.

Stegosaurus lived at the same time as Allosaurus!

The fearsome 30 foot long Allosaurus roamed the North American continent at the same time as the stegosaurus and palaeontologists have discovered evidence that allosaurus preyed on (or at least fought) stegosaurus from time to time.

The remains of an allosaurus have been found with evidence of a puncture wound that matches the size and shape of the stegosaurus’ tail spikes, suggesting that the stegosaurus may have been able to fight off this fierce predator from time to time. Stegosaurus remains have been found with traces of bite marks that match the size and shape of an allosaurus jaw too, which means that these animals definitely clashed on multiple occasions.

Come and see for yourself!

If you’ve enjoyed reading about the awesome stegosaurus, you’ll love visiting the ROAR-some dinosaurs here at Paultons Park. Come and explore with your friends and family and see which dinosaurs you can spot while you’re here. Don’t forget to revisit these facts so you can surprise and delight them with your epic dinosaur knowledge and fascinating facts!

You can ride around the park on your very own 4×4 dinosaur adventure on the Dinosaur Tour Co, coming face to face with different species of dinosaurs that will make you feel like you’ve travelled back in time.

Or, if you’re feeling especially brave, fly up up up in the sky on the incredible Pterosaur Roller Coaster which will take you soaring high above the park and then send you hurtling down towards the ground at speeds of up to 30mph.

Book your tickets to Lost Kingdom in advance to start planning your big prehistoric family adventure.