We reveal the most “terrifying” T Rex facts! 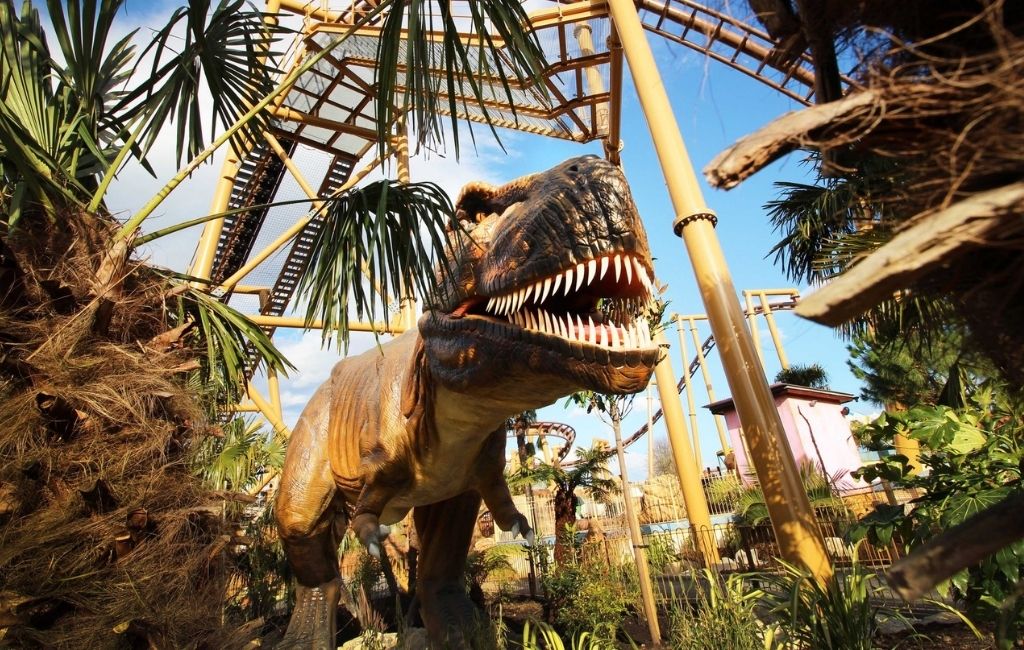 If you’re dinosaur mad, then you should come and explore the prehistoric landscape of the
Lost Kingdom dinosaur park here at Paultons Park. But, before you book your tickets, why not spend some time learning about one of the biggest and most fearsome animals to ever walk this planet; the awe inspiring Tyrannosaurus Rex!

We’ve collected and put together a ROAR-some T Rexfact file of knowledge and information about
one of the best known dinosaurs so that you can wow your friends and family with your expert knowledge.

Are you ready to find learn more about this mighty dinosaur?

Here’s what we know about one of the world’s favourite hunters.

The first Tyrannosaurus Rex remains were discovered almost 150 years ago in 1874 by
geologist Arthur Lakes. He found 2 teeth in Colorado, USA, although, at the time, they were
believed to belong to the Deinodon.

Read also: How to Draw a Dinosaur – Tyrannosaurus Rex

Further fossils and fragments of Tyrannosaurus Rex were found in the following years and
the first partial skeleton was found in 1900. T-Rex remains have since been found all over
Canada and the US.

Tyrannosaurus Rex is not from the Jurassic Period

The Tyrannosaurus Rex lived at the very end of the Late Cretaceous period about 90 to 66
million years ago. Although other species of predatory dinosaurs would have existed in the
Jurassic Period (which ended 150 million years ago), the T-Rex wasn’t one of them!

T-Rex has around 60 bone crunching teeth

The T-Rex jaw held around 60 individual serrated teeth, each one of them as sharp as a
knife. A T-Rex tooth would have protruded around 6 inches, about the size of a banana, and
was perfect for gripping, ripping and throwing prey up into the air before catching and
swallowing them whole. The biggest T Rex tooth that has been found is 30cm long – that’s as long as a standard ruler!

If that wasn’t scary enough, the T-Rex jaw could close with a whopping 6 tons of pressure
and they were capable of ripping up to 100kg of flesh off their prey in a single bite! Best to
stay out of their way!

Their powerful jaws and impressive teeth made the T-Rex a formidable hunter and it’s
perhaps unsurprising that they were carnivorous. It is unknown whether the T-Rex hunted
alone or in packs, but they certainly gobbled down other dinosaurs.

Scientists believe that T-Rex would also have scavenged, stealing prey from other predators
and there is even evidence that they may have eaten each other!

The T-Rex skull was absolutely massive!

The longest T-Rex skull discovered was 1.3 metres (over 4 ft) long and the skull bones were
thick and braced for crushing.

Having such a large skull means that the Tyrannosaurus Rex had a relatively big brain
compared to other predators, suggesting that they were clever hunters. Their skulls
contained an especially large cavity to house the part of their brain responsible for their
sense of smell, meaning they could easily detect food and other predators.

In contrast to its giant teeth and head, powerful legs and towering height, the T-Rex had very
small arms. Although T-Rex arms would have been strong, they wouldn’t have been long
enough to reach its mouth, leaving scientists debating the function of these somewhat
comically short arms, with some believing that they may have been useful for close range
Fighting.

While we don’t recommend testing this theory to find out, it’s very likely that the T-Rex would
have moved a lot more slowly than movies like Jurassic Park would have us believe.
Weighing in at 7 tons, there’s no way that the T-Rex’s bones would have been able to
withstand running at the speeds depicted while chasing after that Jeep. Running too quickly
would put enormous pressure on its bones and put them at risk of shattering. We now know
that its top running speed would have been around 12mph.

T-Rex is one of the biggest land predators ever

Weighing in at 7000kg and standing at an enormous 12 feet tall, it stands to reason that
T-Rex is one of the most sizable land predators of all time. In fact, at 40 feet in length, a
T-Rex’s size is comparable to that of an American school bus. Pretty huge!

But, actually, the T-Rex wasn’t the biggest ever predator to walk on land. The title of biggest
land predator of all time actually goes to the gigantic Spinosaurus, which weighed at least 7
tons, was 12 feet high and measured in at an impressive 60 feet in length.

These days, the largest land predator on earth is the Polar Bear.

So what do you think?

Are you impressed (or frightened) by what you’ve learned about the beloved T-Rex? Which
is your favourite dinosaur?

Whether you’re scared or fascinated by these intriguing creatures, we’d love to welcome you
to Lost Kingdom, where you can truly experience the prehistoric period like never before.