The History of Peppa Pig 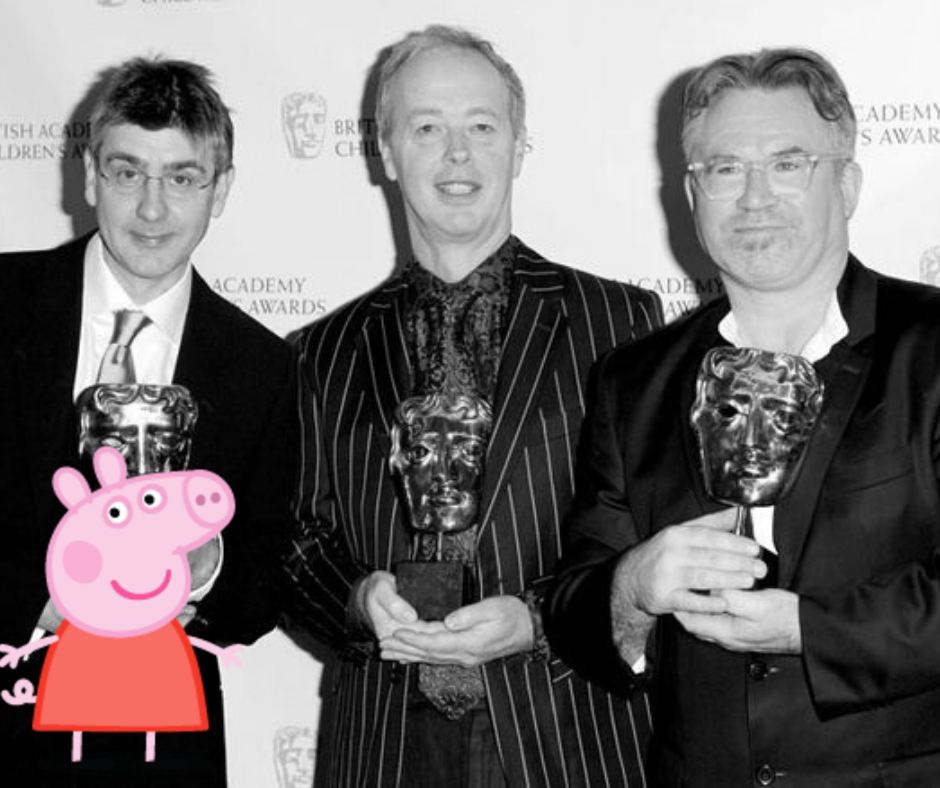 Here at Paultons Park, we’re home to the world’s first Peppa Pig theme park; Peppa Pig World. As you can imagine, we’re huge fans of the show and absolutely love all things Peppa. Today, as a special treat, we thought we’d take a short trip down memory lane to look back at the history of Peppa Pig and reminisce about how it all got started.

In this article, we’ll be looking at the timeline of Peppa Pig, all the way from creation to the global phenomenon it is today.

Animators Neville Astley and Mark Baker were the co-founders of the animated series.

When did Peppa Pig first air?

The first ever episode of Peppa Pig aired on 31 May 2004. The show was originally broadcast on Channel 5.

Is Peppa Pig based on a book?

No, Peppa Pig is not based on a book. There is a series of books based on Peppa Pig, however the animated series came first. One of these books, Peppa meets the Queen, was written in celebration of the Queen’s Diamond Jubilee.

How did the creators come up with Peppa Pig?

Animators Neville Astley and Mark Baker wanted to create a children’s animated series that had clear and concise story lines with beginnings, middles and endings. They also wanted to create a main character who was a girl but who was different to the existing portrayals of princesses and ballerinas, so they created four year old Peppa who is confident, bright and cheeky.

What does Peppa Pig wear?

Title character, Peppa Pig, wears a red dress as the creators wanted her outfit to reflect her slightly fiery personality. Occasionally Peppa is depicted in yellow rainboots and a coat. Peppa wears her yellow boots when jumping in muddy puddles, which is one of her favourite activities.

Who was the first voice of Peppa Pig?

The first person to voice Peppa Pig was four year old actress Lily Snowden-Fine. Lily also provided the voice for Peppa Pig in the pilot episode and continued to portray Peppa for the duration of the first series. Read more about the actresses who have played Peppa Pig.

Harley Bird provided the voice for Peppa Pig for 13 years from 2007 to 2020. She was just five years old when she got the part and was the third actress to play Peppa Pig.

English actress Amelie Bea Smith has been the voice of Peppa Pig since taking over from Harley Bird in 2020.

When did Peppa Pig first air in the US?

Peppa Pig first aired on Cartoon Network’s Tickle-U segment for preschoolers on 22 August 2005. Since February 2011, Peppa Pig has aired on Nick Jr as a half hour show. The first 2 series of Peppa Pig were re-dubbed with American actors but since 2007 the series has been shown with the original British soundtrack in the US.

How many episodes of Peppa Pig have there been?

What other countries is Peppa Pig available in?

Peppa Pig is watched in 180 countries and is dubbed in 40+ languages. The show has become an international sensation.

Is Peppa Pig shown in Australia?

Yes. Peppa Pig is available to watch in Australia with the exception of Mister Skinnylegs, which is an episode that features a friendly spider called Mister Skinnylegs. The episode encourages children to overcome their fear of spiders by befriending them, which was deemed inappropriate for Australian audiences due to the number of dangerous spiders native to Australia.

Who writes the Peppa Pig songs?

The Peppa Pig songs are upbeat, catchy and family-friendly. A number of songwriters have contributed to Peppa Pig, including Clare Bradley, Julian Nott and Paul Moessl.

Peppa Pig has a number of associated songs including the series theme tune, in-episode songs, charity singles and studio albums.

When did Peppa Pig World open?