The British actresses who have voiced Peppa Pig 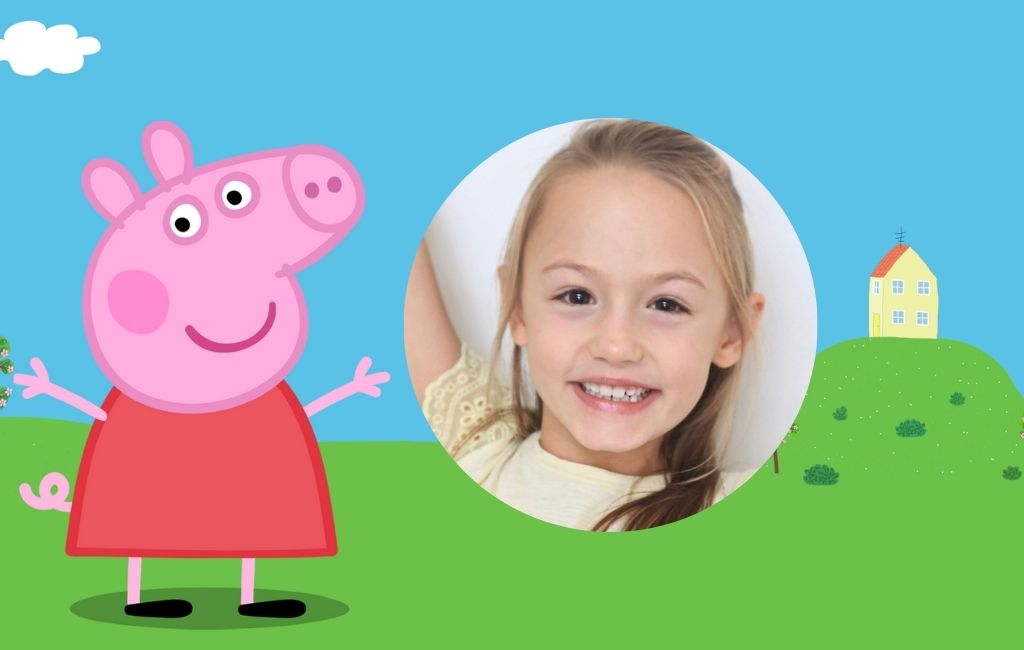 Peppa Pig is one of the world’s most famous and well-loved characters and has been played by 4 different actresses. Since she first came on our screens in 2004, she has delighted and entertained millions of families becoming a global sensation.

The animated series is available in many different countries and languages, including Finnish, German, and Mandarin. Children worldover love immersing themselves in the adventures of Peppa Pig.

The title character, Peppa, has been voiced by Amelie Bea Smith since landing the role in January 2020. She described the role as a “dream come true”. Three other actresses have played Peppa before Amelie. Here is some more about each of the people behind the voice of Peppa Pig.

The original episodes of Peppa in 2004 were voiced by Lily Snowden-Fine.

Lily Snowden-Fine provided the voice for Peppa Pig from 2004 to 2005, featuring in the entirety of the first series including episodes such as Muddy Puddles and Mr Dinosaur is Lost. She also voiced Peppa in the original pitch pilot of Peppa Pig back in 2002.

She played Peppa in 2005 when the series was first released on DVD. Lily Snowden-Fine provided vocals for Peppa in songs as well as being her voice in the episodes. Lily not only voiced Peppa but actually helped to write the show.

She has also voiced various other characters in the show, including Melissa, Peppa Clones, Beat Box, and Paper Jam Peppa.

Lily’s parents Alison Snowden and David Fine are animators who actually worked on the production of the Peppa Pig animated series, as well as other children’s favourites such as Shaun the Sheep.

Lily left the show in 2005 when her voice became too deep to continue to portray Peppa.

After leaving the show, Lily Snowden-Fine moved from the UK to go to Canada and she now lives in Vancouver, BC, where she is pursuing her career as a distinguished painter and illustrator. Lily has exhibited her art in several exhibitions and won many awards for her work. She works with select freelance clients such as the New York Times and the National Film Board of Canada.

Cecily Bloom provided the voice for Peppa Pig for series 2 of the animated series in 2006.

The first episode of Peppa Pig that Cecily Bloom played Peppa Pig in was Bubbles, which starts with Peppa and George being told off by Daddy Pig for blowing bubbles into their orange juice through a straw.

Cecily Bloom also provided the voice for Lizzy Elf in the children’s animated series Ben & Holly’s Little Kingdom. Ben & Holly’s Little Kingdom is a series about the friendship between fairy princess Holly and Ben Elf. The voice for Wise Old Elf in the series is provided by another Peppa Pig cast member, David Graham, who is also the voice behind our favourite Grandpa Pig!

Harley Bird landed the role of Peppa Pig in 2007 when she took over from Cecily Bloom for the third series of the show.

Harley Bird was just 5 years old when she first got the role and she actually couldn’t read at all. To make sure the actress got all her lines right the crew would feed the lines to Harley, who would then emulate them and repeat the words to be featured.

Harley continued to voice Peppa Pig for well over a decade, but actually became accustomed to having her lines fed to her and continued to work in this way until she left the series at 18 years old in 2019.

She first voiced Peppa in the 2007 Christmas special “Peppa’s Christmas”, in which Peppa and George send their letters to Father Christmas and then Daddy Pig goes to get the family a festive tree.

In 2011 Harley Bird won a British Academy Film Award (BAFTA) for her role as Peppa, making her the youngest ever person to be awarded one! She voiced Peppa in the Official BBC Children in Need medley as well as several other projects.

While playing Peppa Pig, Harley Bird grew very fond of the other cast members and said that they became like a family and had provided her with lifelong “unforgettable memories”.

When Harley Bird announced she was leaving Peppa Pig in 2019 she said “Becoming the voice of Peppa Pig at the age of five was the start of an incredible journey, and I’ll never forget my time on the show.”

The show’s co-creators Neville Astley and Mark Baker said: “As our longest-standing Peppa, Harley’s award-winning contribution to the show over the past 13 years has been tremendous, making her a key part of the success of Peppa Pig.”

At just nine years old, Amelie Bea Smith (now 11) took over from Harley Bird as the fourth and current actress to provide the voice of Peppa Pig.

Amelie Bea Smith is a British actress who has been a fan of the show since she was a baby herself. In fact, Amelie was such a big fan of the show that her first word was actually “Peppa”. It’s almost like she was born for the role.

Amelie Bea Smith also starred in Netflix horror series The Haunting of Bly Manor, which she is actually too young to watch herself, as well as several episodes of Eastenders in 2018 and 2019. Find out more about Amelie’s role as the voice of Peppa Pig here: Who voices Peppa Pig? Meet Amelie, the voice behind Peppa!

Each of the actresses have brought their own unique style to the role of Peppa Pig and been important parts of the show’s development. Big fans of the show will be able to notice the subtle differences and nuances between the voices of the four actresses who have played Peppa while viewing episodes from different series.

Paultons Park is home to the world’s first ever official Peppa Pig themed theme park? You can come and explore and adventure with your favourite characters from the TV show here at Peppa Pig World in Paultons Park. A great day out for the whole family! Don’t forget to reserve your entry by booking TICKETS in advance.