The weirdest dinosaur names that ever existed! 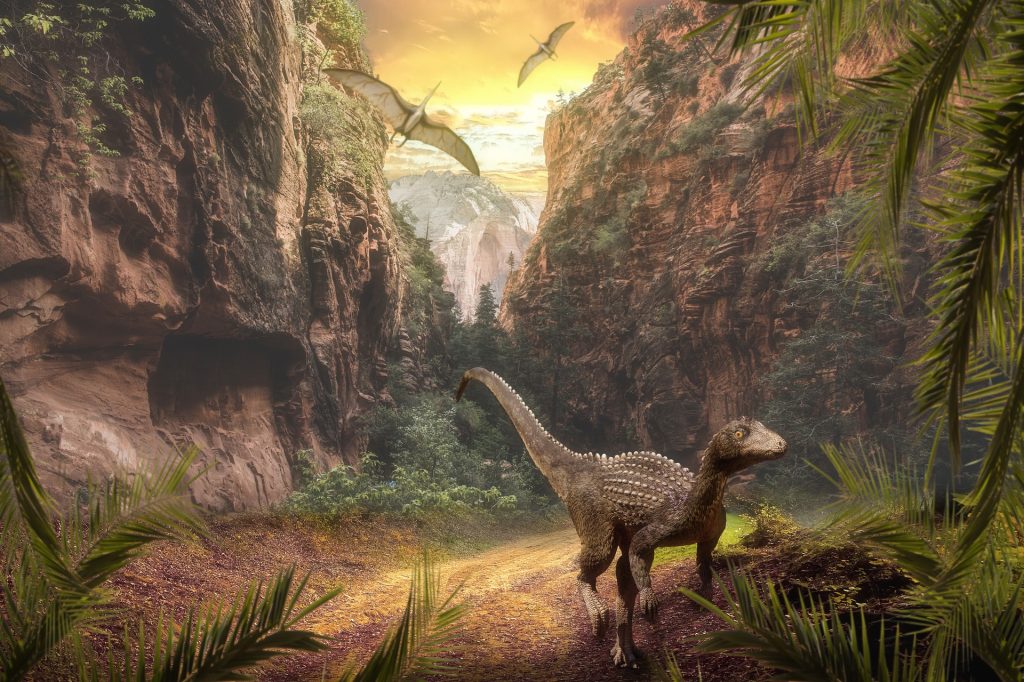 Sometimes the scientists who name their discoveries make some… interesting… name choices and we are fascinated by them. And dinosaurs are no exception! We’ve rounded up some of the weirdest, most wonderfully named dinosaurs for your amusement. Get ready for rock and roll stars, Disney inspired dinosaurs and some interesting meanings behind the names as we dive into this list!

Have you ever seen a dinosaur? No? Then you need to visit the Lost Kingdom at Paultons Park ASAP. Travel back in time with your friends and family to explore a prehistoric landscape where you’ll find thrills and adventure. If you’re lucky, you might come face to face with one of our animatronic “living” dinosaurs, so keep your wits about you!

How do dinosaurs get their names?

In 1841 the director of London’s Natural History Museum, Sir Richard Owen, came up with the word ‘dinosaur’ to describe the giant prehistoric reptiles we’ve grown to know and love. He came up with the name by combining the Greek word ‘deinos’ meaning terrible and ‘sauros’ meaning lizard – terrible lizards!

Individual species of dinosaurs are also often named descriptively and are sometimes named by the palaeontologist or expedition team who first discovered them. Their names also tell us a little about the first impression scientists have of that particular dinosaur and it sometimes leads to wonderfully weird names that often have quirky stories behind them!

Let’s take a closer look at some of the weirdest names given to dinosaurs. Which is your favourite?

We’re kicking off with an absolute classic dinosaur with a very interesting – some might say appropriate – name. This calculating carnivore’s name is translated to mean “Tyrant Lizard King” and was named by Henry Fairfield Osborn in 1905. But can you guess which dinosaur this refers to?

T. Rex, as it’s commonly known, is the world’s best known dinosaur and it was the biggest carnivorous dinosaur ever found when its remains were first discovered in Hell Creek, Montana, in 1902. Can you imagine what it must have been like for the expedition who discovered such a huge and powerful animal? Chilling I’m sure. I don’t think it’s very surprising that they chose such an aggressive and dominant name for the T. Rex.

Named after the adorable baby deer from Disney’s 1942 animated classic, Bambi, this dinosaur has a pretty unlikely name. Bambiraptor is a Late Cretaceous dinosaur from around 72 million years ago.

The Bambiraptor remains were discovered by a 14 year old fossil hunter in Montana in1995. The fossilised skeleton of the juvenile dinosaur was actually 95% complete and it allowed scientists to further understand the link between dinosaurs and modern birds. Bambiraptor was a dromaeosauridae theropod, which means that it was a feathered dinosaur that stood on 2 legs. It was named after Bambi due to its young age.

Sauroposeidon was a dinosaur that existed around 113 to 110 million years ago in the early cretaceous period. Its name means “lizard earthquake god”, the use of earthquake in its name is reference to the creature’s huge size and how it would have shaken the ground as it moved. Many of the largest dinosaurs, including Diplodocus and Apatosaurus (also formerly known as Brontosaurus) are sauropods, the same classification of dinosaurs as Sauroposeidon.

While Sauroposeidon is not the longest, biggest or heaviest dinosaur; it could well be a candidate for tallest dinosaur based on the length of its neck, which could have been as long as 17 metres!

As silly a name as Pantydraco might sound, it is named for good reason and it has nothing to do with pants! Pantydraco was a bipedal dinosaur (meaning it had 2 legs, kind of like humans) of the late Triassic Period that was herbivorous.

It was discovered in a quarry in Wales, UK, which is where it gets its name from. ‘Pant’ is the Welsh word for ‘valley’ and ‘ffynnon’ is the Welsh word for fountain or spring. ‘Draco’ is the latin word for dragon, which means Pantydraco translates as Dragon of the Spring Valley. Pretty cool name despite how funny it initially sounds!

Drinker is a relatively obscure dinosaur named after the world renowned palaeontologist, Edward Drinker Cope. Edward Drinker Cope was renowned for his part in the so-called ‘Bone Wars’ of the 19th century, which saw him and his rival Othniel Charles Marsh competing to be the best in their field. Ironically, it is thought that the Drinker could actually be the same dinosaur as the Othnielia, which was named after Othniel Charles Marsh, which would be yet another thing linking these two palaeontologists together.

The Drinker dinosaur is a relatively small late Jurassic dinosaur thought to be 2 metres long and weigh a maximum of 10kg. It walked on two legs and had proportionally short arms like the much larger T. Rex.

Alive in the late Jurassic period, Gasosaurus was discovered in the Sichuan Province, China by a gasoline company and was named in their honour. It was discovered in 1985 during the construction of a gas facility.

Gasosaurus is a carnivorous dinosaur that would have stood on two strong legs. It has two short arms. Much about the dinosaur is actually unknown because the fossil that was discovered by the gasoline company remains to be the only discovery of this dinosaur genus and it was unfortunately missing a skull fossil!

Giraffatitan is a 23m length sauropod, standing on 4 thick pillar-like legs with a long neck towering up into the air. It was a herbivorous dinosaur alive during the late Jurassic period and was originally discovered in Tanzania.

The name Giraffatitan means “Titanic Giraffe”. The Giraffatitan was more slender and compact than other sauropods like the brachiosaurus, which gave it a more giraffe-like body shape.

You might think this doesn’t sound like a dinosaur name at all. Well, Irritator is actually the name of a genus of spinosaurid dinosaurs. The actual dinosaur that fits this genus is the Irritator Challengeri – the genus is named after the dinosaur.

When the palaeontologists were given the fossilised remains of the Irritator Challengeri, they discovered that the collectors who had handled the fossils prior to them had attempted to patch up and reconstruct the remains using unsuitable materials. Before they could study the remains, the palaeontology team needed to clean them up – hence the irritation that inspired “Irritator”.

Despite the fact that the clean up process would have indeed been a challenge, the “Challengeri” part of the dinosaur’s name was actually named after Arthur Conan Doyle’s fictional character Professor Challenger.

While not an official dinosaur name, we think this one deserves a mention. The Cryolophosaurus is jokingly referred to as the Elvisaurus due to its crest’s likeness to Elvis Presley’s hair! Scientists have been referring to it as its informal name, Elvisaurus, since its discovery in 1994.

The light and fast Cryolophosaurus was the first carnivorous dinosaur to be discovered in Antarctica, although it should be noted that the climate in Antarctica was nothing like it is today. Antarctica was considerably warmer during the early Jurassic period and was teeming with lush vegetation and plentiful forests.

So, despite being discovered in the Antarctic, Elvisaurus wasn’t running around in the snow like you might imagine!

Which is your favourite weird dinosaur name?

If you’d like to learn more about the different dinosaurs, you can browse our blog to find all sorts of fascinating facts and then take our dinosaur quiz to test your knowledge and find out which kind of dinosaur you are!

Do you feel ready to venture into the Lost Kingdom and brave the world of the dinosaurs? Lost Kingdom is home to a bunch of dinosaur themed attractions and activities for you and your family to enjoy – including two world class roller coasters, a dinosaur themed adventure play park and family rides!

Book your tickets to Paultons Park  in advance to avoid disappointment on the day and to start planning your perfect theme park day! We hope to see you soon and to help you make memories that will last a lifetime.