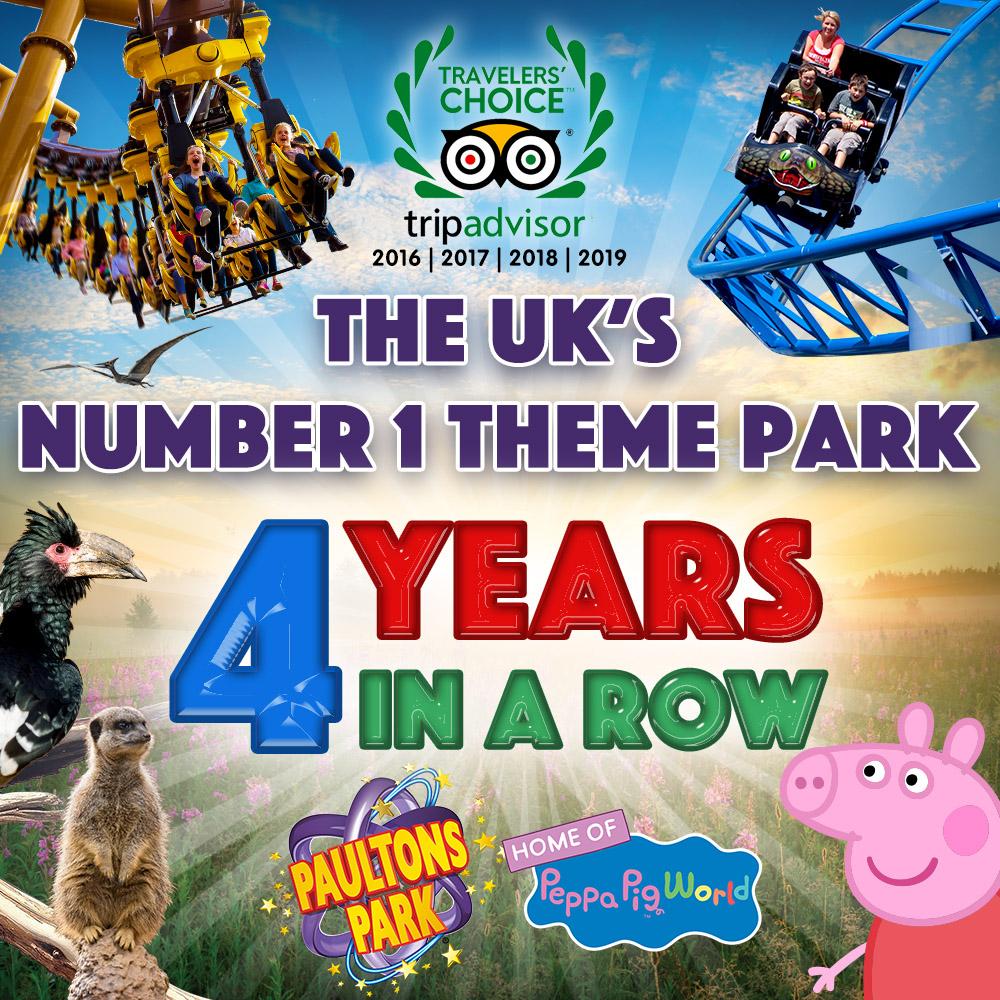 Paultons Park, home of Peppa Pig World, retains place in TripAdvisor list of top 25 amusement parks in the world and moves up to 8th best-rated in Europe.

Hampshire-based, Paultons Park – home of Peppa Pig World – has retained its title as the UK’s best-rated amusement park in the TripAdvisor Travellers’ Choice Awards, winning the title for an unbeaten fourth year in a row.

Paultons Park was also awarded the 8th best-rated amusement park in Europe and 24th in the world in the Travellers’ Choice Awards, which were announced on Tuesday, July 23rd.
The TripAdvisor Traveller’s Choice Award winners were selected based on reviews and ratings of visitors. An algorithm was used in order to determine the top 10 list and took into account the quantity and quality of reviews and ratings for amusement parks worldwide, gathered over a 12-month period.

TripAdvisor’s Paultons Park listing shows that 93 per cent* of guests who have visited the Park reviewed their trip as either “excellent” or “very good”.

Richard Mancey, Paultons Park managing director, said: “We are delighted and honoured to receive the TripAdvisor Travellers’ Choice Award for the UK’s best-rated amusement park for four years running. As the only UK theme park to have received this award for more than two years in a row, the award truly reflects the hard work, dedication and effort of our entire team, who strive to ensure that our guests enjoy the best possible experience when visiting Paultons Park.

“As the TripAdvisor award is based on visitor ratings and feedback, winning this award is of particular importance to us as it reflects the positive experience of the many thousands of happy guests who come to Paultons Park each year to build wonderful family memories.”

Earlier this month, Paultons Park announced details of a major new investment with the forthcoming launch of an entire new themed world, Tornado Springs, which is set to open in May 2020. Tornado Springs, which will cover four acres and showcase over eight new rides and attractions, will be themed around a fictional 1950’s desert town in America’s Midwest, introducing rides such as Storm Chaser, a free spinning ride which will be the only rollercoaster of its type in the UK.

Tornado Springs will become the fifth themed world at Paultons Park, extending the existing offering to appeal to families with children between the ages of 3 and 13 and joining the UK exclusive Peppa Pig World, Critter Creek, Little Africa and the Jurassic-themed world of Lost Kingdom. The theme park, which covers over 140 acres of parkland adjacent to Hampshire’s New Forest, opened in 1983 and has since built a reputation across the UK and beyond for high quality, wholesome family entertainment of the highest standard.

James Mancey, operations director, added, “At Paultons Park, we are constantly looking for ways to improve our offering and ensure that our guests have the best possible experience within a delightful, entertaining and safe environment. The launch of Tornado Springs will broaden our appeal to a wider age range and further consolidate our position as the UK’s best-loved family theme park.”