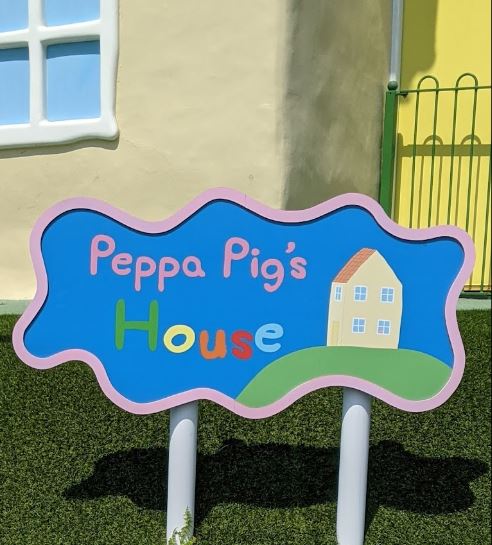 Peppa enthusiasts worldover have been dreaming of being able to jump right into the happy and wholesome Peppa Pig universe for as long as the hit animated TV show’s been on our screens.

With its kind and colourful characters, plentiful friendships, everyday adventures and family friendly storylines, it’s unsurprising that fans want to be transported right into the whimsical world of Peppatown. And now, thanks to the very clever creative folk at Paultons Park, you can! You can even meet Peppa and visit her whole family in their home.

Where is Peppa Pig’s house?

Peppa Pig’s house is where Peppa and her family live. Peppa Pig lives in a little house on top of the hill. Her house is yellow and has a red roof.

The house is located within the Peppa Pig World area of Paultons Park, in the UK, which is themed entirely around the Peppa Pig universe. You’ll find Peppa Pig’s house near Grandpa Pig’s Little Train and Daddy Pig’s car ride.

The house is yellow with a red roof and stands atop a hill just like in the TV series. The house is clearly signposted and little fans of the TV series will spot it very easily and are sure to want to find out what’s inside.

How do you get to Peppa Pig’s house?

Guests can approach Peppa Pig’s house by following the winding path that circles the house. At the end of the path there is a small staircase to climb, 9 upwards steps in total. There is also an accessible lift option for guests with mobility issues. The lift can also be used so that parents with prams/buggies are able to access the attraction.

Once you are at the ground level of Peppa Pig’s house, you can walk around the side of the house to the bright yellow door, which is open to welcome you in!

Can I go inside Peppa Pig’s house?

Peppa and her family love having guests and you are more than welcome to visit them in their home here at Paultons Park.

When you enter the house, you’ll be greeted by Peppa Pig, George Pig, Mummy Pig and Daddy Pig in their kitchen. The family are standing behind their bright blue kitchen table, which is laid and ready to eat at!

What is it like inside the real Peppa Pig house?

Everything in the house is made to look like the Peppa Pig series’ animation style. The kitchen is decorated just like it is in the TV show. The walls are a lovely sunny yellow, the tiles are black and white check, there is an orange notice board and there are green curtains and kitchen units!

On the wall behind you as you face Peppa’s family, there is a mirror and some family portraits.

Who is inside the Peppa Pig house?

Standing from left to right in the kitchen are Mummy Pig, George Pig, Peppa Pig and Daddy Pig. They’re smiling and are very happy to see you.

Mummy Pig is wearing her classic orange dress, George is dressed in blue, Peppa Pig is wearing her usual red dress and Daddy Pig wears turquoise. They all appear in the same clothing and shoes that they wear day to day in the series.

“I’m Peppa Pig!” Peppa says happily as you approach the kitchen. She then introduces the rest of her family “This is my little brother George, this is Mummy Pig and this is Daddy Pig”. Each member of the pig family oinks as they are introduced and everyone laughs as Daddy Pig makes a very loud oink sound indeed!

This introduction is the same as the opening titles of the TV show and the Peppa Pig theme music can be heard playing in the background while the characters speak. Young Peppa Pig fans will delight at the fun and familiarity of the experience, which really sets the scene. The introduction is lovely in itself but stick around because the family wants to talk to you some more!

When you visit the Peppa Pig house, you’ll get to spend a moment with the whole pig family as they prepare to make pancakes. The kitchen table is set for 4 with plates and forks. Peppa’s plate doesn’t have a fork on the plate like the others – Peppa is already holding her fork in her hand!

A short scenario unfolds in front of you with dialogue and narration in the style of a Peppa Pig episode.

“Today Peppa and her family are going to make pancakes,” the narrator says as the family oink and turn their heads to look around.

“I LOVE PANCAKES!” Peppa says loudly. The whole family agrees with her. “Everybody loves pancakes.” says the narrator “don’t they children?” which gives the children in the kitchen the chance to interact with the scene in front of them.

Peppa then asks Mummy Pig how pancakes are made. Mummy Pig says it is easy! “We just put eggs, milk and flour into this bowl and stir them together.” As she says this, she stirs the spoon in the bowl and lifts it up to show everyone the spoon. Peppa makes an impressed and interested “ooooh” sound in response.

Daddy Pig lifts up his frying pan and says “and then we cook the mixture in this pan to make a pancake!” He continues to say that the most important part of the process is when Daddy Pig gets to flip the pancake high up into the air.

“Are you sure you want to flip the pancakes, Daddy Pig?” Mummy Pig asks “Last time, they got stuck to the ceiling!”

Peppa exclaims “and they’re still there!” at which point the entire family looks up towards the ceiling and spots that there are in fact already pancakes stuck to the ceiling! There are 5 pancakes flat against the kitchen ceiling. The whole family laughs.

“Ah yes,” says Daddy Pig “But that won’t happen this time.” Peppa laughs and says “Silly Daddy!” in the way she frequently does in the animated series.

“These pancakes are going to be yummy!” Peppa declares. Daddy Pig then asks the family what they would like to do after making the pancakes. Peppa suggests feeding the ducks in the park, Mummy Pig suggests taking a ride on Grandpa Pig’s train, Daddy Pig says they could take a ride in Miss Rabbit’s Helicopter and then Mummy Pig says they could go to ride the cars in Grandad Dog’s garage. Vroom vroom! Peppa loves all of these suggestions and is very excited.

“But before we do any of that,” reminds Mummy Pig “we have to make our pancakes!”

Daddy Pig and Peppa Pig say that they are getting hungry. “Mummy,” says Peppa “Will my pancake be long?”
“No, Peppa.” Says Mummy Pig “They will be flat and round like everybody else’s.” and the whole family laughs loudly.

“That was a very bad joke!” says the narrator “Have fun in Peppa Pig World! Goodbye everyone.” Then the Peppa Pig theme music plays again, signalling to everyone to leave the kitchen and carry on with their day at the park.

The main exit to the kitchen is to your left. It will lead you down a staircase and along a short path at the front of Peppa Pig’s House that ends in a green gate which opens into Peppa Pig World. Guests who are unable to go down the stairs will be able to use the lift to leave the attraction.

Before you visit Peppa Pig World…

We think you’re going to love Peppa Pig World and we’re so excited to welcome you to the park and to be a part of your special day out. In order to make the most of your visit, you can book tickets in advance online to avoid disappointment on the day.

You could also get in the mood to visit Peppa Pig World by learning all about Peppa Pig and her friends here on our blog or taking our fun filled quiz to find out which Peppa Pig character you are!