When was the Jurassic Period? 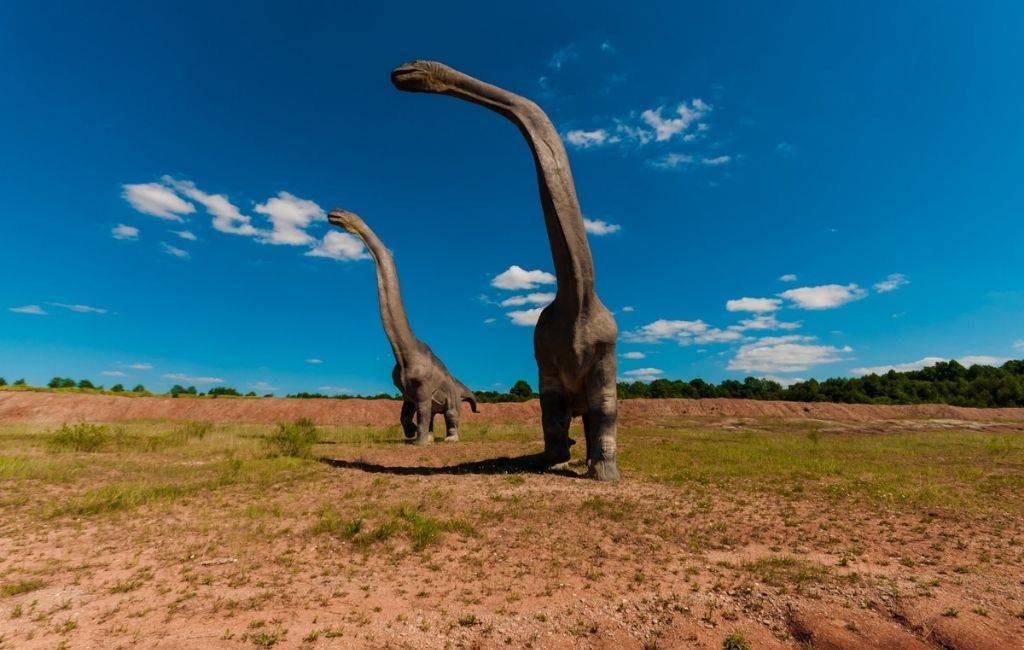 The Jurassic Period started around 201.3 million years ago and ended 145 millions years
Ago.

What was the earth like during the Jurassic Period?

The earth was very different to how it is now. The continents and islands hadn’t fully formed
yet and the supercontinent (Pangea) was still breaking apart. The Jurassic Period was a
time of big change for the planet.

Not only was the land shifting, but this also allowed the formation of new oceans and
mountains. Water flooded the spaces in between the new continents. Mountains rose up
from the ocean floor.

Rising sea levels caused an increase in humidity and plant life. Areas that were previously
deserts became lush and sub-tropical. There was no polar ice during this time.

What plants were around in the Jurassic Period?

Some of the plants that existed during the Jurassic Period are still around today!

If you could travel back in time, you could expect to see palm trees, pine trees and monkey
puzzle trees growing just like they do now.

Conifers and ferns dominated the landscape and would have been food for smaller
Herbivores.

What dinosaurs lived during the Jurassic period?

The Jurassic Period was a time in which particularly large dinosaurs roamed the earth.

A particular type of dinosaur classification that thrived during the Jurassic Period was the
Sauropods; known for their huge size, long necks and tails, small heads and 4 pillar-like feet.

Well known Sauropods include the Diplodocus and Brachiosaurus; which could reach
heights of around 12-13 metres tall.

The Allosaurus was a large carnivorous predator, who stood on two legs and had dozens of
sharp serrated teeth, similar to the T-Rex. There is lots of evidence to suggest that the

Allosaurus attacked and ate Stegosaurus and smaller Sauropods, although they are unlikely
to have hunted full grown Sauropods due to their size.

Other dinosaurs from the Jurassic period include the tall Giraffatitan, the spiked Kentrosaurus and the winged Archaeopteryx.

Was the T-Rex alive during the Jurassic period?

While some types of Tyrannosaurs did exist during the Jurassic period, they were much
smaller than the much loved Tyrannosaurus Rex. The T-Rex lived during the late Cretaceous
period around 68-66 million years ago.

Read also: At last, the most terrifying T Rex facts were revealed!

The smaller Tyrannosaurs of the Jurassic Period wouldn’t have posed a threat to the large
Sauropods of the time.

Were there other animals in the Jurassic period?

Yes! There were other animals aside from dinosaurs in the Jurassic Period.

While dinosaurs never lived alongside larger mammals like saber toothed tigers or woolly
mammoths, there were smaller mammals about at the time including rodents and the
otter-like Multituberculata.

Aside from the mammals, there were also reptiles, insects and arachnids, including the
earliest crocodiles and turtles. The first birds also appeared during the middle to late
Jurassic Period.

Were there humans in the Jurassic period?

There were no human beings during the Jurassic Period.
Humans and dinosaurs have never coexisted, although we have lived alongside some
animals that did coexist with the dinosaurs. Those animals include crocodiles, snakes, bees,
sharks, lobsters, horseshoe crabs, starfish, turtles and the duck-billed platypus.

What was the ocean like during the Jurassic period?

The Jurassic Period had a diverse marine ecosystem and the oceans were teeming with
creatures, coral and plant life.

Seas were home to the large carnivorous Plesiosaurs, which had long necks and paddle-like
fins. Large sharks and crocodiles were also at the top of the food chain in the Jurassic
Ocean, feeding on scaly fish, crustaceans and plankton, which were all plentiful.

It wasn’t until around 2 million years ago that the earliest humans appeared on earth, 143
years after the end of the Jurassic Period. Still, we love learning about this important and
diverse geological period of time and thinking about the fascinating creatures that roamed
our planet long before us.

If you’d like to experience this rich and exciting time period up close, why not venture deep into the heart of the Lost Kingdom here at Paultons Park.

Here in the Lost Kingdom, you’ll find our dinosaur themed attractions, including two world-class roller coasters, a prehistoric playground and Jurassic themed family rides. If you’re lucky, you might even come face to face with our ‘living’ walking dinosaurs. Are you brave enough? Book your tickets now.